The assistance of some corporate companies is making it safer for beachgoers at a spot in the north of the island considered one of the most dangerous for swimmers.

With so many lives lost over the years as a result of drowningon Bathway beach in St Patrick, the Grenada Lifeguardsis now making it a bit safer for beach goers.

Deb Eastwood, Director of the Grenada lifeguards says it was an eighteen month long dream however they were stumped due to a lack of funds.

Eastwood expressed thanks for the generosity and contributions coming from Ramdhanny and Real Value, which made this a reality. This she says is a welcomed venture.

Eastwood adds that the tower would provide storage for their AED devices and other equipment.

Bathway was selected as the next most appropriate site she says.

The tower is expected to be complete in the coming week.

In the meantime, Eastwood is also encouraging parents especially, to get their children signed up for swim week which comes up on April 19th. 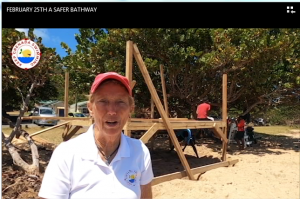