The public sector unions took another swing at their employer on Wednesday as they marched in protest of the non-payment of the 4 percent increase in salaries.

Unlike the first protest march which saw hundreds of public officers flooding the streets of St. George’s and the rerouting of traffic, this time there were only minor disturbances in traffic. 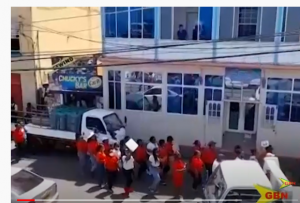