Newly crowned Dimanche Gras king Sean “Sour Serpent” Niles says he was awaiting this moment for the last 15 years of his career.

On Sunday Sour Serpent with his song “Two wrongs make a right” and “Call Buju” emerged victorious, securing his first Dimanche Gras crown since he started his career as a Calypsonian in 2004.

He managed to defeat defending Monarch Finley “Scholar” Jeffrey, preventing him from attaining his 10th crown.

Back in competition after 8 years, Raymond “Beast” Matthew placed 2nd with his songs “The Oil Boom“ and “My Apology,“ leaving former King and 9 time Dimanche Gras title holder Finley “Scholar” Jeffrey to settle for 3rd with his contributions “Dancing Without Feet” and “Sing for the lord”.

Sour Serpent says now that the competition is over, he can now focus on launching his website dedicated to Calypso.

“Am presently setting up a website, its called “The Calypso Shop” so persons from around the Caribbean, anywhere could come in and purchase a song at whatever arrangement… right now am looking regionally, because I believe two songs for a year is not enough. But it’s so that Dimanche Gras only caters for two songs and I could do quite a bit.”

Sour Serpent who also holds the Independence Calypso title says much more is in store as he prepares for next year. 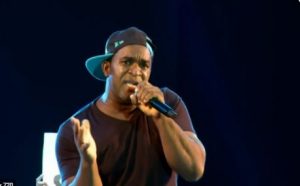