Gloria Williams say she is fed up and needs help in putting an end to what she terms ‘a nightmare.’

The La Calome resident of 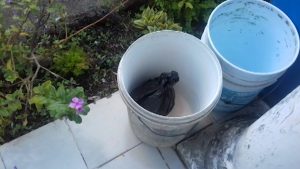 eight years says she is living a nightmare, having to deal with human feces deposited on her property by a suspected neighbor.

For years she complained she has been dealing with human waste in and around her home.

Her last encounter was Saturday morning, where a plastic bag containing human feces was placed in her water bucket in her verandah.

Ms. Williams reached out to GBN with her complaint as a means of finding the help she so desperately needs.

One year after moving into the village she says her horror began.

On Saturday morning she woke up to one of her worst encounters yet, feces in her water bucket.

Although numerous reports were made to the police, and arrests have been made, the problem continues.

She says she is not satisfied with the way things are being handled, as she continues to suffer.

Williams, who lives alone, says she is fearful for her life, as threats were uttered to her by a particular individual, whom she suspects might be the culprit.

She wants the upper echelon of police to step in and put an end to her suffering. 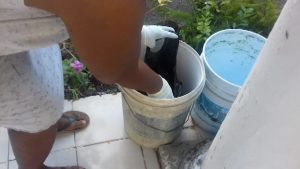