It was a close call for one Shanda, Happy Hill resident who fell through a wooden bridge at dragon bay St. George one month ago

GBN was called to the Dragon Bay area by one resident on Monday, to see the deplorable condition of a bridge used by residents in the community and visitors who frequents the beach.

This bridge connects two villages, Dragon Bay Molinere to Shanda Happy Hill on the other side.

One lady who does not wish to be identified said she was on her way to visit her friend when she had the most horrific experience which left her drenched and helpless.

She is thankful that she did not hurt herself and there were people close by that got her out. However, she is very disappointed that after twenty-plus years nothing has been done.

Her husband told GBN it is better that it happened to his wife than the Prime Ministers’ aged mother. He said that as MP for the area he believes Prime Minister Dr. Keith Mitchell should not allow the bridge to be in that condition.

Another young woman says she is scared for her children who use that path as a shortcut to get to school.

The expressions for safety came from a few other people in the neighborhood. 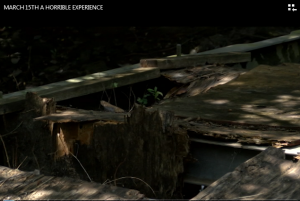 FLU ON THE LOW