It was a proud moment for Grenadians yesterday, as all 5 soca acts delivered masterful performances at the Arima Velodrome, advancing to the finals of the International Soca Monarch.

It was evident that hard work paid off, as testified Mandella Linkz, the first Grenadian performer of the evening, who told local media that sleep was not on his agenda for the last few weeks.

With the bar set high, Vaughn followed shortly after with a solid performance of his hit song ‘Trouble in the Morning’ in the Groove Category.

Mr. Legz and his delivery of ‘whining challenge’ and Soca Monarchs Little Natty and Thunda, who performed their local winner ‘Get in your section’ also secured their place in the March 1st finals.

Outside of host country Trinidad, Grenada with 5 had the largest number of artistes in a semi-final of 39 contenders.

Culture Minister Norland Cox was amongst those who travelled to Trinidad to lend support to the artistes.

Though he expressed confidence in all 5 artistes, he says if the crown is secured in one category he would be happy. 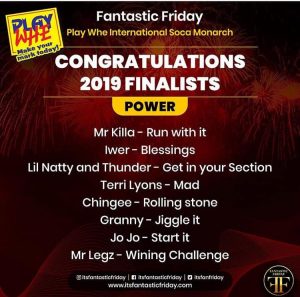 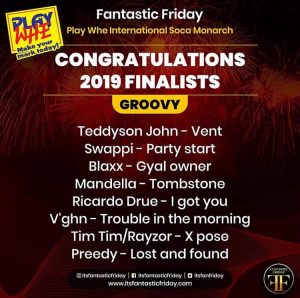 CARRIACOU GETS FIRST MAJOR CRUISE CALL FOR THE SEASON