Livestock farmers in the St. Paul’s area are in distress as they continue to lose their animals to vicious dogs. The most recent attack took place on the weekend.

Richard Simon a livestock farmer in Bay Garden St Paul’s, said the pain has been overwhelming for him and other farmers who have been losing thousands of dollars when their animals are attacked by dogs.

On Saturday he said he was alerted by the noise of goats not far from his house, only to realize that they were being attacked by three dogs he could not identify. After further investigation, he said he realized that 8 of the animals died from dog bites.

Simon said the goats belonged to his neighbour who travelled but left them in his care.

Simon said just a few days ago he lost 4 goats to dogs and is yet to be compensated for it. He said this is a financial burden not just for him but also the other farmers who are trying to make a living.

While the police were informed in prior incidents, the farmer says it is difficult to make leeway in the investigation if the owners of the dogs cannot be identified. He indicated that most of the time farmers stand losses because the owners of the dogs will not claim them or deny they were a part of the slaughtering. 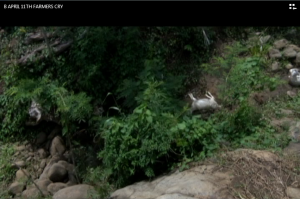