That’s how Grenada‘s former permanent representative to the United Nations and former chair of the Alliance of Small Island Developing States has described the climatic conditions being experienced.

The Caribbean Drought and Precipitation Network has forecasted that Grenada and other parts may experience prolonged drought.

The Barbados-based Caribbean Institute for Meteorology and Hydrology (CIMH) has warned that, due in part to a weak El Niño, drought conditions will likely continue in many Caribbean islands, through July and into September.

The drought, it says, started with an April dry spell that escalated by the beginning of June into drought conditions.

Lengthier drought conditions are feared in Grenada and other parts of the region.

Grenada has been leading the charge for climate change, amongst small islands developing states (SIDs).

Various scientific studies have said that climate is warming at a faster rate than predicted.

Champion for SID’s Dessima Williams, calls it a climate emergency.

“We are in a climate emergency that is escalating beyond what is predicted and this is underwritten by solid scientific evidence and the experience we are having.”

She says however there are actions that people can take, to reduce the effects of climate change.

“One is to pledge for rapid reduction of emissions. The second would be to go to carbon neutrality by 2050 and the third one is to make a significant pledge for climate financing. We have just had this horrific experience of Abaco in the Bahamas and I think the Caribbean can go forward with evidence to say we are in a climate emergency and we need more rigorous and vigorous climate action.”

CARICOM this week are attending a summit on climate action in New York, hosted by Secretary General of the United Nation, António Guterres.

These include drinking more water, stay cool, buy umbrellas to combat the sun, plant food and vegetables and change diets. 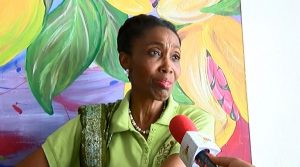