Climate change has become a growing concern for many Carribean islands, especially with the rising sea levels which can result in the loss of our beaches and coastal areas.

Bathway beach, famous for its festive atmosphere and robust waters, has a natural barrier a few meters from the shore that has served as a wave break, protecting the beach from erosion. however, recent visitors to the beach would notice that this barrier has begun to collapse.

Paul Phillip is a marine biologist who has worked in coastal zone management. he spoke with GBN and says while most people believe the barrier to be a reef, it is actually made of sandstone.

He says the collapse of the barrier can have a detrimental effect on the beach.

But all is not lost; Mr. Phillip says there are steps that can be taken to prevent the beach from disappearing.

Mr. Phillip says with quick action and proper funding Bathway beach should be added to the list of projects that Grenada will take on in its fight against the effects of climate change. 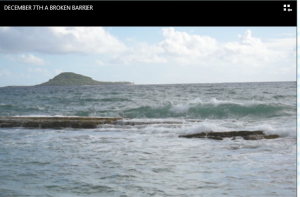 YOUTH PROSPECTIVE ON THE BUDGET