TWO LIVES LOST – A MOTHER AND HER SON AND ONE MAN IN CUSTODY ASSISTING POLICE WITH THE INVESTIGATIONS AS THE COMMUNITY OF MADEYS ST PATRICK REEL FROM A NIGHT OF TRAGEDY.

Two lives lost, one narrowly escaped and one man is in police custody, all from the same tragic incident.

The remains of a 94-year-old mother Germaine Duncan and her 60-year-old son Nicolas Duncan, were pulled from their home after fire engulfed the house on Wednesday night just around 6 pm.

According to police reports, the fire may have started from a vehicle explosion that eventually caused the two-story wooden and concrete house, and a motor vehicle to be destroyed by the blaze.

Members of the fire department of the royal Grenada police force quickly responded to the incident but were unable to save the duo.

ASP Desmond Richard officer in charge of the Community Relations department of the RGPF explains.

Police have also confirmed that one man is in custody helping officers with the investigation in connection with an incident that occurred prior to the fire, which may have set the deadly incident in motion.

Reports indicate that, before the fire, the deceased man was stabbed during an altercation with another male in the area just a few feet from his home.

In an attempt to get help, it is reported that the victim drove his vehicle to his home but hit a gas tank situated in an outside garage. Reports are that the tanks exploded and burst into flames catching the house on fire.

Eyewitnesses say after hearing the loud crash, the woman’s caregiver ran outside to see what happened, but then the vehicle and house caught on fire, before the caregiver could go back inside to rescue the bedridden woman.

Residents of Madeys St Patrick are in tears after trying to come to terms with the loss of the mother and son.

This neighbor who broke down in tears said the deceased elderly woman was a loving person who will be missed.

The Commissioner of Police along with the Rank and File of the RGPF express deep sympathy to the family and relatives of the deceased. 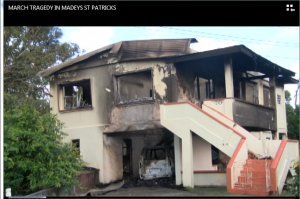 WHY IS IT TAKING SO LONG?