The New National Party held its convention over the weekend moving into full gear toward the next general elections which is constitutionally due next year.

The event was hosted semi virtually from the Trade Center in Grand Anse with five viewing sites around the country where party delegates assembled to elect a new executive.

As the election tension spins into high gear, re-elected Political Leader of the New National Party and Prime Minister of Grenada, Dr. Keith Mitchell says leadership is no easy task whether in Opposition or Government.

Using the distinguished Prime Minister of Barbados as an example, Dr. Mitchell while addressing the NNP convention cited PM Mia Mottley’s toil and struggle in politics.

Seemingly setting the tone for the campaign towards the next general elections, the leader of the NNP impresses that no parachuting will be allowed.

He notes the message to get ready for the next general elections has been sent and the party will not be taking their achievements for granted.

Political Leader of the National Democratic Congress Dickon Mitchell gave his view on what he believed was leadership several weeks ago.

Prime Minister Mitchell has now cited several commonalities among the Caribbean leaders which he emphasized are important traits to have.

The NNP’s Political Leader says they will be introducing a number of young people at the political and technical levels to complement the experienced membership as the transition continues.

Oliver Joseph takes over as Chairman with Clarice Modeste Curwen as deputy as the other top executive positions remain mostly unchanged. 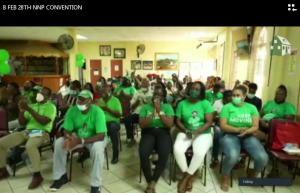