The western side of the island has grown synonymous with the issue of major landslides and Rockfall, and early Wednesday morning was no different.

A quiet night for one resident of Grand Roy Hill, St John was interrupted by a loud crash in the wee hours of Wednesday morning.

Norma Chance McEwen said she was asleep when she was awakened by a loud crash at 2am that she soon found out was a fallen boulder.

The boulder had crashed through the walls of her neighbour’s house.

She says fallen boulders have become somewhat of a norm for residents in the area; however, concerns have not lessened because of the frequency of the incidents.

McEwen is hoping some intervention can bring an end to the continuing issue.

On January 16th, 1991, Grenada recorded its worst vehicular accident in history when a boulder fell on a passenger bus in Concord St. John, killing all 9 people onboard. 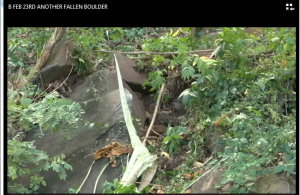