SECOND SUICIDE IN ONE WEEK

According to reports the individual was threatening to take his own life in recent days.

Speaking with the aggrieved sister of the deceased, Marlena, she described her brother as a pleasant person, loved by everyone in the neighborhood.

She tells GBN  his body was discovered laying on his bed motionless, which sent shock waves through the community of Rose Hill once again.

His close friend Denny Charles says Jerry never held a grudge, but he believes his friend had a few challenges that he was battling with.

Still trying to come to terms with the first hanging death in the area and now this. Its hard Charles says. Just six days ago, the body of 32-year old Carl Hutchinson was found hanging behind his home in Rose Hill.

Sources say the deceased at the time lived with his girlfriend and their child.

Charles urges Grenadians to draw closer to God at this time. 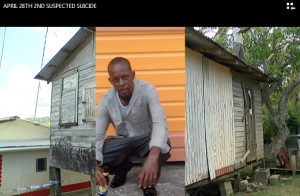