The Government of Grenada is considering setting up diplomatic presence in India.

Minister David who returned from his visit to India on Friday and left immediately for the United Nations General Assembly (UNGA) currently underway in New York, described the visit as fruitful, an added that talks were held on increased cooperation between the two countries, particularly in the area of agricultural research.

Grenada and India share a longstanding relationship through which the Caribbean island received considerable assistance for infrastructural development and a variety of short-term training courses on Information and Communications Technology (ICT). Minister David thanked Minister Jaishankar for his country’s long-standing support, adding that he looked forward to greater cooperation between the two countries.

The meeting agreed to a visa waiver for holders of official and diplomatic passports, and planned to negotiate further, similar arrangements for holders of regular passports.

The two Foreign Ministers also discussed the possibility of Grenada and India signing an extradition treaty, which allows for the extradition of people, accused or convicted of crimes listed under the treaty, in either one or both states.

Under Indian law, an extradition request for an accused “can be initiated in the case of underinvestigation, under-trial and convicted criminals”.

While in India, Minister David also met with potential investors in the education, tourism and agricultural sectors. He also had the opportunity to visit other cities including Mumbai, Ahmedabad and Hyderabad.

The Foreign Ministers’ meeting served as a precursor to the meeting between Indian Prime Minister Nahendra Modi and Caribbean leaders, which takes place this week on the sidelines of UNGA. 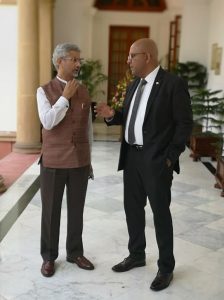 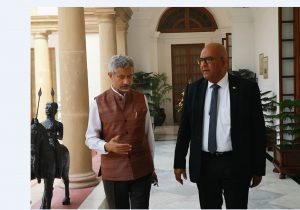