Although affected by the ongoing “work to rule” by the Grenada Union of Teachers, the Grenada National Brain Bee competition culminated on Saturday, with JW.Fletcher student Jevonie Thomas emerging ‘Best Brain’ in Grenada.

The tenth edition of the competition was held at the St. George’s University Bourne Lecture Hall.

The process to select the best brain begun in September 2018, with registration for students.

This was followed by a screening where the final 29 were chosen from three zonal competitions.

From there, a tutorial was held in February, leading up to Saturday’s final.

Over 200 questions were posed to students who were engaged in exams, clinical lab and then final questions.

An Essay Competition was also held which was also won by Jevonie Thomas, 2nd place Sekou Sam (GBSS), with a tie for 3rd place between Teja Patrice and Aime Chase.

An emotional Jevonie, as he was shown appreciation by staff and students of his School on Monday, said going into the competition he didn’t know much about the brain, but learnt along the way.

He encouraged peers to ‘let nothing stop you’.

Flanked by his parents Karen Goggard and Jerome Thomas and members of his support team, the form three JW Fletcher Catholic Secondary student, encouraged his classmates, to strive for excellence, at all times.

His Father told those gathered, that Jevonie has always been a “special child”.

Jevonie now moves into preparation to represent Grenada in the International Brain Bee Competition in Daegu, St. Koreo, as the only Caribbean Country.

National Coordinator Gail Blackette says despite the “work to rule” challenge, 2019 was a good year for the competition. 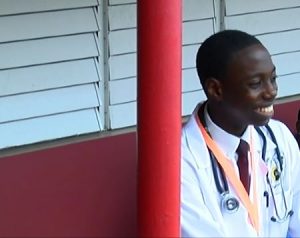 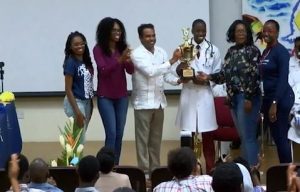