Friday June 19th marked the 40th anniversary of one of Grenada’s most remembered tragedies.

Just after 3pm on Thursday June 19th 1980 there was an explosion at the Queen’s Park Stadium that took the lives of three people and injured many others.

The explosion occurred during a Butler-Strachan/Heroes Day celebration from a bomb reportedly placed under the pavilion.

Seated on the raised platform were leaders of the country which included Prime Minister Maurice Bishop.

The Grenada Revolution Online website says hundreds of Grenadians attended the rally which was to pay tribute to Tubal Uriah Butler and .

Butler was a strong union leader from Grenada in Trinidad and Strachan was an activist NJM youth murdered in 1977.

The day goes by quietly, however it is one remembered by many. 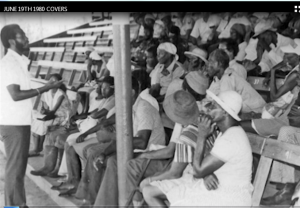