A ceremony was held in recognition of the men’s selfless act on the September 20th, when the freak bus accident on the Carenage St. George’s occured.

The recognition ceremony was held at police headquarters, Fort George.

With the lives of 15 people at stake, the quick response of eleven divers, three of whom are police officers, did not go unnoticed by the RGPF and Corporate Grenada.

Acting Commissioner of Police Edvin Martin in expressing gratitude, termed their actions nothing short of miraculous.

The plaque contains the RGPFs’ motto inscribed in Latin but carrying the English meaning ‘bringing light out of darkness,’ was also presented to the three persons performing CPR.

Last Friday’s accident saw both police and civilians working together with one common goal in mind, saving lives.

Commissioner Martin also extended condolences to the family of the one individual who perished and wished for a speedy recovery to those still hospitalized. 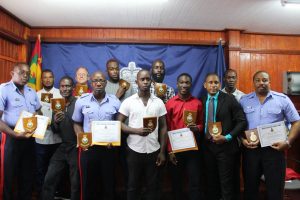