Justice was swift for a St. George’s businessman who reportedly man who choose to burst the head of a senior police officer.

The court is sending a message.

This was the sentiment of lawyer Jerry Edwin following this morning’s sentencing of the man charged with wounding a sergeant of police.

38-year-old Godwin John, a businessman of Grenville street, St. George’s has been sentenced to 10 months in prison, four days after striking Sgt Adrian Panchoo over the head with a bottle.

The wounding incident occurred on Friday at Grenville Street, St. George’s when sergeant Panchoo intervened in an altercation between two men and was struck with a bottle to his head, causing him to sustain an injury that warranted five stitches.

The maximum penalty for wounding according to Edwin is normally two years and a maximum fine of $4,000.

He says while the court was making a statement, other factors were considered in john’s sentencing.

Sergeant Panchoo is said to be recovering at home in good spirits. 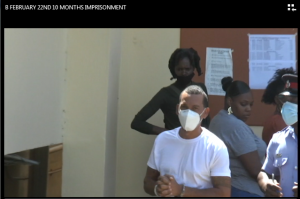